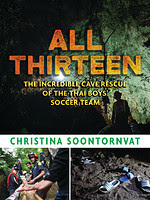 ✰✰✰✰ In 2018 the world was captivated by the amazing rescue of twelve young boys and their coach from a flooded cave in Thailand. The members of the Wild Boar soccer team often liked to go on adventures together after practice. One day the boys and their coach decided to go caving. What started out as an adventure, turned into a nightmare as they quickly found themselves trapped in a cave with floodwaters rapidly rising all around them. There was no way out. All the boys and their coach could do was huddle together on a patch of land in complete darkness and wait.
As news of the missing boys spread, experts from all over the world arrived to help with the rescue. But this would be no ordinary rescue. Even trained divers struggled against the muddy waters and strong currents. With time running out, it would take the coordination of many people with different areas of expertise to orchestrate this harrowing rescue. Some even doubted a rescue could be possible. With time running out, and the rainy season just arriving, the rescuers had no choice but to proceed as quickly as possible. You won't be able to stop turning the pages as this rescue against time unfolds.

The Bottom Line: In this suspenseful, detailed account of this rescue, Soontornvat also includes abundant information about Thailand's culture, religion, and politics. Maps, photographs, and other interesting facts supplement the text to help illustrate the complexity of this rescue effort. Suggested reading for middle grade science class and anyone interested in rescue or survival stories. [Note: Full-color photographs not seen in the ARC.]

Details: All Thirteen: The Incredible Cave Rescue of the Thai Boys' Soccer Team by Christina Soontornvat. Advanced reading copy published by Candlewick in 2020. 288 p. ISBN: 978-1-5362-0945-7 [Note: I received a free copy from the publisher in exchange for an honest review. This was made possible via the Early Reviewers program at LibraryThing.]

Book Review: 'Tracks in the Snow' by Wong Herbert Yee 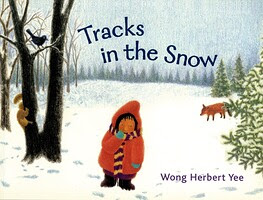 ✰✰✰✰½ A curious little girl sets off in the snow to follow a set of tracks. Who made these tracks? And where do they go? She follows the tracks through rocks and across a bridge, but there's many more to follow. Into the wintry woods she goes looking for a rabbit or maybe a bear or perhaps a woodchuck. Where will she end up? And who made the tracks? Read this sweet little story to solve the mystery.

The Bottom Line: Check out this easy read with rhyming verses and repetition. Tots who enjoy exploring nature will appreciate the engaging illustrations in colored pencil as they follow this little girl's adventure through the snowy woods. Highly recommended for beginning readers ages 2 - 5.

✰✰✰✰ A teenaged Margaret Powell had her sights on becoming a teacher, but lack of money squashed her plans. Instead she entered domestic services as a kitchen maid, the very lowest level of domestic service there was. The job was bewildering at first; the cook expected her to know how to do things like blacklead the grate, scrub the steps, and iron bootlaces. No one showed her anything, and she had to quickly learn on the job. Margaret soon realized there was little time for fun. As Powell worked her way up to cook, she tried to bide her time until she could fulfill her real goal: finding a suitable husband. Filled with wit and wisdom, Below Stairs gives the reader a look at the many challenges and scant rewards of being in domestic service during the first half of the 1900s in England.

The Bottom Line: This quick read is perfect for the beach or a rainy weekend. Powell takes the reader on a behind-the-scenes tour of life in domestic service. Things have changed a bit since Powell was in service, but many of her insights and observations are still relevant today. This memoir will appeal to fans of Upstairs, Downstairs and Downton Abbey. Also, recommended for fans of tell-all memoirs and British social history.

Book Club Notes: On a scale from 0 - 5, with 5 being the highest, this book averaged 4 stars. Our book club has the option of reading the book, watching the movies, or both. A good number of our group watched either Downton Abbey or Upstairs, Downstairs and noted that both series were more about entertainment and romanticism than the book. The book was very detailed and written in a diary-like form. Powell's observations were intelligent, and someone noted that Powell could have gone far in life if she had been born into a different family.
We enjoyed reading this book and taking a look at a different era. Although the stories may not have been as juicy as expected, Powell was spunky. Servants had very limited opportunities back then, but she challenged herself to do better in life. She achieved her lifelong goal of find a husband and even managed to go back to school.
The reprint edition includes discussion questions, but you can also find them in a guide from the Mansfield/Richland County Public Library. 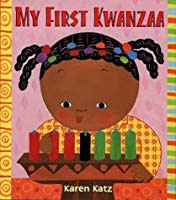 ✰✰✰½  Follow along as a little girl celebrates her very first Kwanzaa and learns about the traditions associated with the holiday. As each of the seven days goes by, she learns about the Seven Principles including the importance of unity, community, helping others, and family. On the very last day, it’s finally time for a celebration including music, dancing, and a feast of delicious African food.

The Bottom Line: A very basic introduction to the African-American cultural holiday, Kwanzaa, and the Seven Principles. Ideal for little ones in PreK – K and useful for teachers. Includes a note about Kwanzaa on the last page. 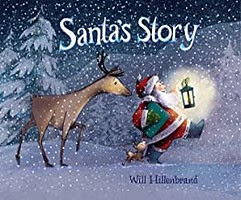 ✰✰✰✰✰ It's Christmas Eve and Santa is ready to go, except for one thing...No reindeer! Now where did all the reindeer go? Santa searches and finds that Dancer is dancing, while Prancer is busy prancing. Oh My! What is Santa to do? The all-call on the horn and jingling of the bells fail to bring in the missing reindeer, but there's something else that just might work. Will Santa get the reindeer to focus,so all the toys can be delivered on time? Check out this charming, seasonal tale to find out.
The Bottom Line: Hillenbrand has woven a treasured childhood tradition into a holiday story with colorful, digitally rendered drawings in large two-page spreads. This picture book is so much fun to read and enthusiastically recommended for storytimes or bedtime reading.
Details: Santa's Story written & illustrated by Will Hillenbrand. Picture book published by Two Lions in 2019. 32 p. ISBN: 978-1542043380
Posted by Nana A.Herron at 12/20/2020 09:30:00 AM No comments: 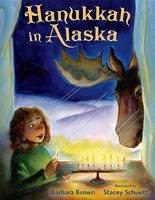 ✰✰✰✰✰ Things are different in Alaska. Daylight in winter is very short, there are moose, and it snows...a lot. When one particular moose camps out in a little girl’s backyard, she is not happy. She tries everything to lure the moose away, but nothing works. It looks like the stubborn moose is there to stay. Then on the last night of Hanukkah, something magical happens. Under the spectacular northern lights of the season, the little girl finds a solution to her dilemma. What could possibly make a big moose move? Check out this holiday picture book and find out!

The Bottom Line: Beautifully illustrated in soft shades of acrylic & gouache, this delightful tale will become a holiday tradition to read with your family. Enthusiastically recommended holiday reading for the young and the young at heart. 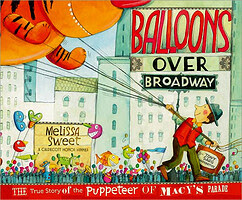 ✰✰✰✰½ Have you ever wondered how the gigantic balloons in the annual Macy's Thanksgiving Day Parade came to be? They are the highlight of the parade for many, but most of us have no idea how it all started. Over a hundred years ago, a talented immigrant named Anthony "Tony" Frederick Sarg came to America. He specialized in making marionette's with lifelike movements. After coming to New York City, Macy's department store asked Tony to design a "puppet parade" for the store's "Wondertown" windows. The display was so popular, Macy's tasked Tony with creating a holiday parade for all the immigrants employed by Macy's.
The first Thanksgiving Day parade in 1924 was a huge hit and included live zoo animals. Over the years the parade grew, but some of the children were afraid of the animals. Tony hoped to replace the lions and tigers with puppets, but how? And how did the puppets turn into the iconic, gigantic balloons? Check out this book for an informative, but entertaining read about Tony Sarg, the puppeteer who transformed the Macy's Thanksgiving Day Parade into the event we look forward to each year.

The Bottom Line: Written and illustrated by Caldecott Honor Winner, Melissa Sweet, this biography of Tony Sarg is filled with fascinating, colorful illustrations in gouache, collage, and mixed media. The book includes an Author's Note with some interesting tidbits about Tony and his life's work, information about the art in the book, a bibliography, and sources for quotes. Both Sarg's story and the author remind us "...that "play" may be the most important element in making art!" Highly recommended for kids ages 7 - 10 or anyone who is interested in art and American History.

Details: Balloons Over Broadway: The True Story of the Puppeteer of Macy's Parade written & illustrated by Melissa Sweet. Picture book published by Houghton Mifflin Books for Children in 2011.  40 p. ISBN: 9780-547-19945-0

All articles and reviews are original content. Copyright © 2009 - 2020 Nana A. Herron, MiniBookBytes. All Rights Reserved.
If you would like to contact me about my reviews and articles, please send me an email. The majority of books that I review are borrowed from local libraries. However, feel free to contact me if you are the author of a mystery, horror fiction book, or cookbook and would like to request a review. I also enjoy reading books for kids and teens.
The articles & reviews contained on this blog are provided "AS IS" for informational purposes only. Old posts may be updated at any time.
The comments and opinions expressed here are my own and do not represent my employer. 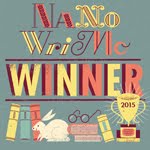